Imagine if social media existed during the hype of Elvis, The Beatles, Jackson 5 and even the pop invasion during the late 1990s.  And then think about the effects now with the likes of One Direction.  Word of mouth, radio stations and music videos were the only way to learn about these new artists.  In today’s world, word of mouth is sharing a video online or discovering them on a reality competition show.  It can take just one person to peak interest and to spark a chain reaction. 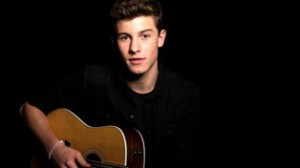 Just like fellow Canadian Justin Bieber, Shawn Mendes has a very similar story of being discovered. Although, Mendes compares himself more to the likes of Ed Sheeran than Bieber, their instant popularity is in connection to social media.  Shawn began posting six second cover song videos to his Vine account in 2013.  In a matter of months his followers and views grew into the millions.  On Vine, Shawn has 3.8 million followers and 347, 552, 213 loops (the number of times his videos have been shared).  A majority of his videos on YouTube have over a million views and they include:

At the age of 15, Shawn was discovered by current manager, Andrew Gertler.  Once signed to Island Records in June 2014, Shawn released his debut single Life of the Party.  The song debuted in the top 25 on Billboard’s Hot 100.

The future is bright for the youngster from Pickering, ON.  His debut album Handwritten will be released April 14th and he’s about to embark on two major tours. Being the opening act for Taylor Swift’s 1989 Tour and headlining his own tour.

Walk off the Earth

Walk Off The Earth is a band from Burlington, ON and another great example of being discovered online.  Their success began while posting low-budget videos of cover and original songs to YouTube.  The band is best known for its covers of popular music on YouTube, making use of uncommon instruments such as the ukulele and the theremin, as well as looping samples.  There cover video of Gotye’s Somebody I Use to Know generated an enormous amount of buzz, as the video demonstrated all members playing one guitar at the same time while performing the song.

The rock band was signed to Columbia Records in 2012 and appeared on The Ellen DeGeneres Show that same year.  Walk Off The Earth released their debut album R.E.V.O  in 2013.

Social media has become a, if not the, new platform for up and coming artists or talented artists that have gone unnoticed to catch their big break.  Going on YouTube or Vine you are certain to find many individuals and groups doing the same, hoping to be the next Shawn Mendes or Walk off the Earth.  Who will be the next superstar?

Social Media has the potential to take performers to the next level. Interested in discussing how social media can move your career or business forward? Contact New Motto to begin the conversation.