My name is Alycia Mazepa, and I have just begun my role as a Sales and Business Development Representative at New Motto this past month. I am a fourth year student at the DeGroote School of Business specializing in Information Systems while working toward a minor in Computer Science.

On Thursday, September 12, 2013, Software Hamilton hosted another StartupDrinks event where people in Hamilton and surrounding areas could come together to discuss project ideas, and form relationships. I had the opportunity of attending this event for the first time on behalf of New Motto, and was able to learn about many projects that were going on within this area. The people and the atmosphere at The Winking Judge were friendly, and allowed for the exact goal of StartupDrinks to be accomplished.

When attending this event, I had not realized that there were so many great things going on within Hamilton. There were many projects in the midst of discussion touching topics including learning languages, real-estate, and gaming between many of the people attending. Within each of these projects, the people that gathered made suggestions on how to do things, how they could help, and in total gave advice on next steps. Overall, the people that attended the event were simply there to help!

The Winking Judge was a warm and welcoming bar which only helped networking at this event. They had three areas for seating including front patio, inside sitting, and back patio. Throughout the evening more people joined for StartupDrinks and it quickly became a packed house, as people drew together to discuss only topics of innovation.

New Motto was able to gain some great exposure by going to this event, and making these connections. This was a great opportunity for New Motto to get and offer feedback on digital communication services.

If you are thinking of starting a small business or have an idea for an application definitely come out to StartupDrinks! The next StartupDrinks is on Thursday, October 9th. Gain connections, knowledge, and most of all a helping hand! New Motto hopes to see you there!

Hoping to connect with New Motto? Contact us at: info@newmotto.com. We can help with all of your web, video and social media projects. Hope to talk to you soon!

Interested in a free website analysis? Contact us for a free one-page report analyzing your website’s features and the impact it is having on your digital communications strategy! We want to help you drive your business today!

Well, I can’t believe New Motto has already been on location at 225 Locke Street South, Hamilton, for 2 weeks. The time has absolutely flown. The Hellingman Communications team has warmly welcomed the New Motto team & clients into the building. The street is beaming with positive energy every day. Just walking down the street to grab a coffee and building new connections with the friendly/familiar faces on the way is worth the price of admission. 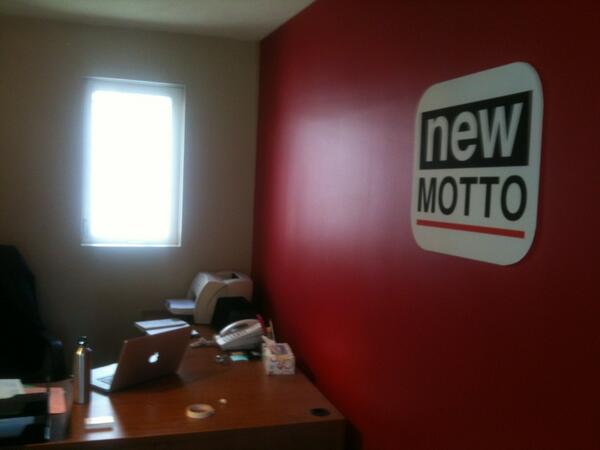 There was a time when I thought New Motto would never need to leave the home office. It has been operating efficiently and effectively from a network of home-based contractors for 3 years. But I’ve learned that providing a welcoming environment for our clients and contractors is an undeniable asset.  The fact that Tricia Hellingman maintains a beautiful space and Locke Street has pretty much any amenity within a stones-throw certainly add to the benefits.

Our tenancy on Locke Street is still in its experimental stages, although if things keep going as well as they have been going, I wouldn’t be surprised if we are here for the long-term. One thing is for sure–we’ve learned a lot about having a unique, collaborative space for clients & workers. No matter where New Motto lives tomorrow, next week, next decade, these early days on Locke won’t be forgotten.

If you’re interested in joining us at our new space to chat about all things web/video/social–feel free to contact kyle@newmotto.ca to schedule an appointment.

Or better yet–learn more about our WordPress website design workshop, held in our front meeting room, which has a truly unique panoramic view of Locke Street.